The Buffalo Soldiers we honor on Buffalo Soldier Days broke barriers and so did Anna Russell Jones. This New Jersey native’s life was spent challenging and overcoming racial and gender myths, stereotypes, and the bigoted definitions of Black life pervading America during her lifetime.

Anna Russel Jones volunteered for Army service in 1940 and was the first African American woman in Philadelphia to do so. Years later, when asked why she would give up a comfortable civilian life for the rigors of the Army, she replied, “I had heard people say that Negro women never gave anything to the Army.  I decided to prove them wrong.”

Prior to reporting to Fort Huachuca in 1942 the forty-year old Russell had already become the first Black woman to receive a four year scholarship to the Philadelphia School of Design for Women (now Moore College of Art & Design).  She created a successful design studio selling her carpet and wall paper designs to decorating firms throughout North America.

As one of the Women’s Army Corps (WAC) original African American members, she quickly became the hub of divisional and garrison information programs, using her artistic talents at the post printing shop, where she created maps, posters, and a variety of informational booklets and pamphlets for troop informational use.  Finding the workload beyond her personal ability to complete, she began training the print shop staff in graphic arts techniques to increase the shop’s output on her own initiative.

The impressive body of work she left behind included not only official publications, but also a series of unit insignia bas relief paintings memorializing the Buffalo Soldier regiments that served at Fort Huachuca.  There is only one of these paintings currently known to exist.  The 10th Cavalry Regiment “Ready and Forward” crest she painted is displayed today at the Fort Huachuca Museum.

She returned to civilian life in 1945, using GI Bill benefits to complete post-graduate studies in textile design and medical illustration in both Philadelphia and Washington DC.  She took up nursing and worked regularly as a technical illustrator for hospitals and medical book and magazine publishers. Her previously segregated alma mater honored her with a doctoral degree in 1987.  Anna Russell Jones, artist, Soldier, died in 1995 at the age of 93. 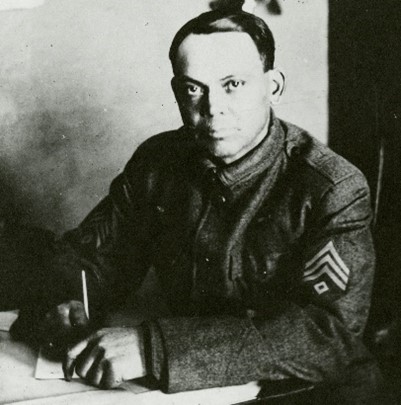 Vance Hunter Marchbanks was born to a Tennessee farming family 22 February 1876.  By 1895, he had decided to enter the Army and "forsake the land of my youth, and take my chances with an unknown world.”  Tired of walking, he immediately chose the Cavalry when told troopers were issued their own horse.

Private Marchbanks was of mixed race (white and Native American), but enlisted for his own reasons, as a “colored” Soldier. Late in his life he reflected, “Being of dark hue, I was placed in a rather awkward position, like all of my people; too light for colored and too colored for white.”

During his early career he served on the Central Plains, in Texas, New Mexico, the Philippines, and spent about 2 months with his troop at Fort Huachuca in early 1899.  At the end of his enlistment he decided give civilian life another try lasting only seven days before he rejoined the Army. This time he enlisted in the 10th Cavalry, and would serve with the “Ready and Forward” Regiment for most of his remaining career.  He returned to Fort Huachuca with the entire regiment in late 1913, was promoted to 1st Sergeant of Troop C, and served as the Acting Post Sergeant Major during the time the 10th joined General Pershing’s troops in Mexico in 1916-17.

World War 1 found the Army in urgent need of competent leaders for the 92nd Infantry Division, an all-Black unit made up of raw recruits and draftees.  Marchbanks and other elite NCO’s from the Buffalo Solder regiments were selected for special training at Fort Des Moines and subsequent assignment as company grade officers in the newly-formed Division.  Promoted to Captain, he sailed for France with the 368th Infantry Regiment in June, 1918.  His unit entered the front lines in August, fighting in the Meuse-Argonne Offensive, and other actions until the end of the war.

The 92nd Division demobilized in early 1919, and Captain Marchbanks was simply mustered out.  He immediately reenlisted, working for a time as a military instructor at a Tennessee teachers college until a position in his old unit became available.  He returned to Fort Huachuca as a senior NCO in 1920, remaining until the unit departed in 1932.

After nearly 44 years of service, Captain Marchbanks retired in October 1939 doing what he had always done--mentoring young people who would follow him into National service.  Filled with pride for his service while active and retired, he often spoke and wrote about patriotism, the contributions of the “colored soldier” to the nation, and about racial injustice. He wrote a manuscript entitled Forty Years in the Army where he reflected on his career. He wrote of the Army, "If they only taught one to shoot a gun I would say the Army is not worthwhile. But one is taught citizenship, discipline, the power of organization, personal hygiene, and many useful trades in the Army and Navy which prepares one for useful citizenship in any community."  Captain Marchbanks passed away February 10, 1973, three years shy of a century of life.